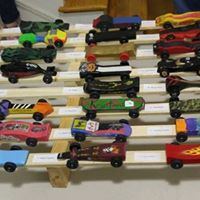 Join us for our annual Pinewood Derby Race on Sat. Feb 22nd from 9:30am-2pm.  This event will be held at Hall’s Cross Roads Elementary School in the gymnasium (racing) and cafeteria (refreshments, crafts).  Scouts will race to earn points for their den as well as to race individually for best time.  There will also be voting in various categories for additional awards such as Best in Show, Best Theme, and Most Creative, Most Patriotic, Most Unique Use of Materials, Best Paint Design, and Best Wood Carving.

The Pack will provide coffee and bagels and we will need volunteers to bring snacks, desserts, drinks of your choice.  In the past, folk have been creative and made snacks and desserts with a pinewood derby theme which is fun but not required.  Examples are apple slices as a car body and grapes pinned on with toothpicks.  If you google “pinewood derby snacks” you’ll see many fun ideas.  Please sign up below if you are able to bring something.

You must turn your scout’s car in by Tues. Feb 18th and it will be held until race day.  If your den is not meeting on that Tuesday,  you can still bring the car that day or arrange to drop it off another time.  This eliminates the need for car check-in on race day to save time!

Note that we will also have a Family Car racing category with no rules (any weight and design are allowed – do not have to use official pinewood derby kit) so feel free to participate yourself as a parent and/or have siblings participate in this part of the competition!

There are two parts to the racing – Den Competition and Individual Competition.

The format for the race is pretty simple and uses the average time from preliminary races to seed each of the cars in each den for group racing.  Slight differences in the track can make one lane perform better or worse than another so the group of cars will rotate lanes for each run to make sure no car has a lane advantage. The cars with the slowest average times from each den will be placed in a race group, followed by the cars from each Den with the next slowest time, leading to the cars with the fastest times in each den. This way all of the cars are racing against similar speed cars from other dens. The goal for the group races on Saturday is finish in the top of your group to help your Den.  Points are awarded to the Dens based on how each car in the group finishes with 1 point to the fastest car through 5 to the slowest. At the end of the Den competition, the group with the lowest score wins. This format helps to encourage concepts of teamwork and gives everyone a greater opportunity to win some of their heats than if the cars were mixed together randomly.

After the Den competition is complete on Saturday, the top 10 fastest cars in the Pack will race again to determine the top 3 cars in the pack.  This racing will be similar to the Den races with the exception that the performance from the preliminary races has no bearing on the final races.  The average run times from Saturday morning will be used to determine which cars make the final race.

Pack 802’s Pinewood Derby Rules:
1.  Build a car using the parts in the BSA “Official Cub Scout Grand Prix Pinewood Derby Kit” handed out by the Pack.  Buying a pre-made car from the internet is not acceptable.  You may use additional accessories and car components sold at the scout store and local retailers as long as they are labeled with the BSA logo.  You must build a new car each year.
2.  Car weight cannot exceed 5 ounces when weighed on the Pack scale on race day.  There is no advantage for being less than 5oz so everyone should aim for that by adding weights to car.  Weights can be purchased from various stores including The Scout Store, Michaels, Jo-Anns, etc.
3.  Minimum bottom clearance (bottom of car to ground) is 3/8″ (including weights) to ensure clearance of the lane guides.
4.  Gravity is the only propulsion source (no motors or CO2).
5.  Powdered graphite is the only wheel lubrication allowed – cannot use liquid sources.
6.  Car design cannot come to a sharp point at the front because it needs to rest on the pinewood derby track pin at start of race.  When it comes to a tip in the front, it is difficult to maintain it’s position on the track and not slip off the pin which holds the car straight.  A tip this is flattened (straight) will work as long as the car is symmetrical.
*There are no restrictions on trimming the wood block, polishing axles (nails), lubricating axles (graphite), drilling new axle holes or moving wheel base, sanding wheels, canting wheels, running on three wheels, adding decorations to car, etc.
Register Car:
Volunteer to Bring Food or Drink:
+ Google Calendar+ iCal Export