Elk Neck State Park is located in Cecil County, MD on a Peninsula bordered by the Chesapeake Bay on the West and the Elk River on the East.  The State Park is divided into four areas including the North East Beach area, the Elk River Camping Area, the Rogues Harbor Boat Launch area, and the Turkey Point Lighthouse at the Southern tip of the peninsula.  The park features a large campground, a beach, several miles of hiking trails, a boat launch, and day use shelters.  The campground offers over 250 campsites, 15 cabins, and four youth group camp areas that are exclusive to registered youth groups with active youth group passes.

Parking:  The youth group camp area is divided by a dirt access road.  All vehicles are required to park perpendicular to the access road.

Facilities:  A full bath house with running water and private shower rooms is available approximately 300 yards from the youth area and shared with campers in the Sassafras Loop.  Potable water is available across the street from the youth sites as well as near the campground exit.  Please note that the water is tested routinely and is potable but may have a slight tint from mineral deposits.

Sites:  The four youth camp areas are located along campground road just pass the Sassafras Loop.  The area is divided by the access road/parking and are located as follows when facing the sites from Campground road:  Raccoon front right along road, Red Fox front left along road, Beaver rear right along woods, River Otter rear left along woods.  Both times Pack 802 has camped here in recent years we have reserved both Red Fox and River Otter along the left side of the camp. 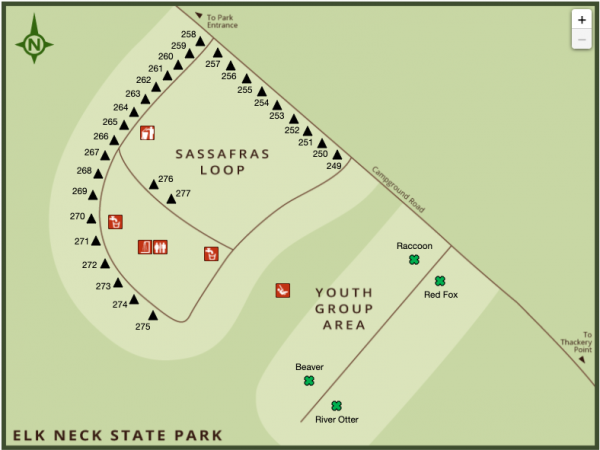 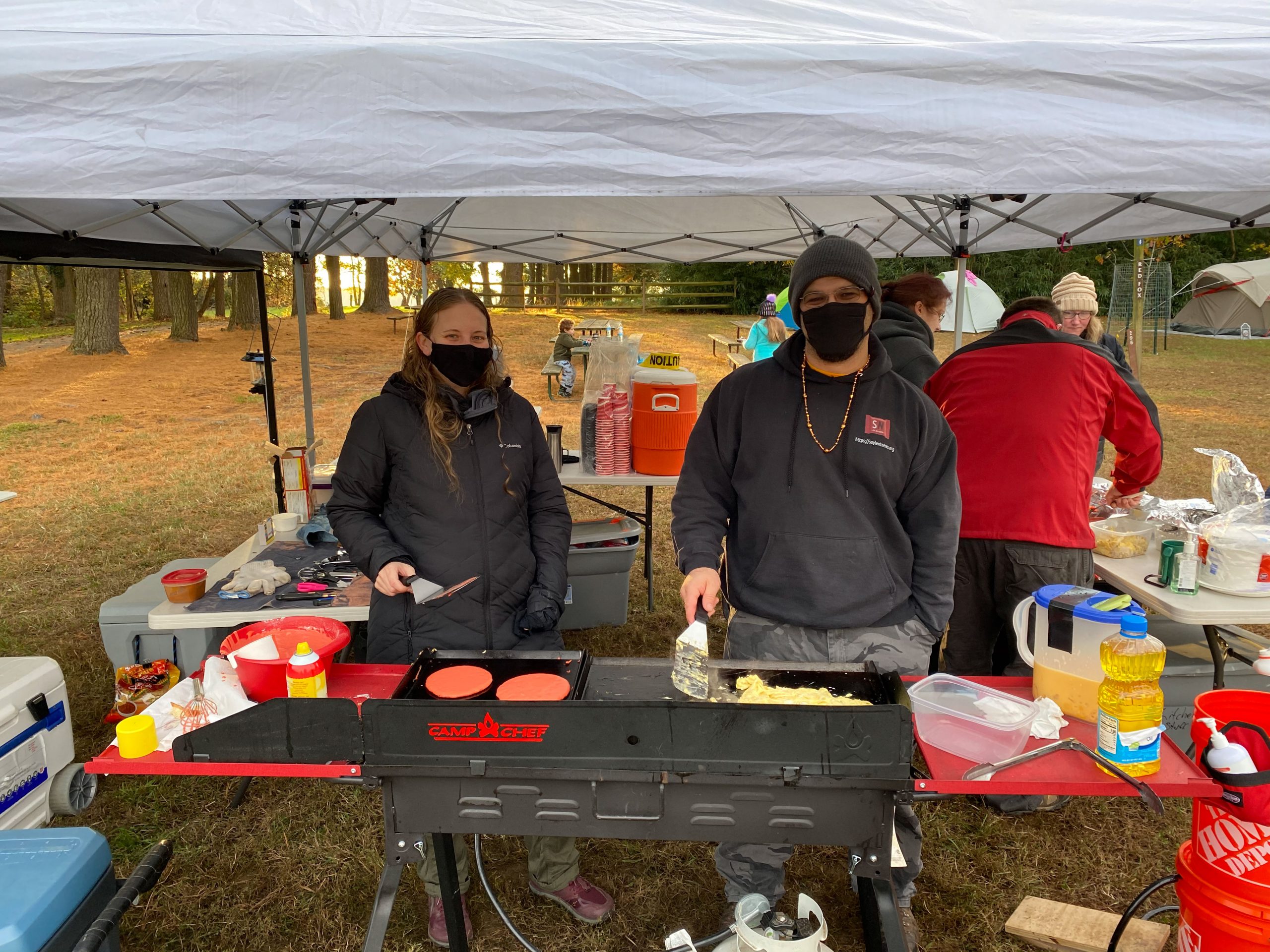 Pack 802 has camped at Elk Neck State Park youth area twice in the last two years and the agenda for each event differed significantly.  While the first trip was focused on exploring the park and featured a hike, this last event was all about having a fun halloween event in a COVID-19 environment.  The traditional halloween experience with trick-or-treating and halloween parties seemed out of reach for 2020 so the pack did the next best thing by having a halloween themed camp.

The scheduled for the day events was setup so that scouts and families that wanted to be home for trick-or-treating could still participate in the majority of the agenda by just coming to Elk Neck for the day.  Shortly after breakfast, scouts were divided into smaller groups and spent about two hours rotating through several halloween themed game stations.  The scout favorite was the scout-powered trebuchet where everyone took turns launching tennis balls for distance and for accuracy.  Additional stations included an orienteering course, a blindfold teamwork exercise to navigate through a graveyard without stepping on anything, and some other small games (ball toss) etc.  Scouts and teams were awarded points for the games similar to a camporee and were awarded some small prizes during the afternoon campfire program.

The menu for the weekend consisted of pretty simple foods that could be modified slightly to give them a halloween theme.  For example, instead of normal pancakes we had pumpkin flavored pancakes.  Similarly, we wrapped hot dogs with cresent roll strips to make mummy dogs and added green food coloring to the macaroni to make it look like toxic zombie waste.  The scouts seemed to enjoy the food theme.

The other big thing that we did on this trip was hold a campfire program in the late afternoon before dinner.  This ended up working really well because we were able to include both the day participants and the campers, and it made the entertainment during the program easier for everyone to see.  Scouts shared some jokes and our leaders put on a fun skit.  We have not traditionally done campfires in the middle of the day but will consider doing more like this in the future because it was more effective.

This trip probably could have been executed almost anywhere, but the inexpensive sites, nice facilities, and semi-private environment at Elk Neck helped to make this a great day and overnight event for my scouts.