Parking:  Roadside parking is available at Antietam Creek along Canal Road.  The campground is accessed by crossing a footbridge over the canal near site 8.  There is no vehicle access to Indian Flats but there is a large parking lot near Monocacy Aqueduct approximately 0.3 miles south of Indian Flats.  There is also ample parking in Brunswick between the boat launch parking lot and the MARC train parking lot.

Facilities:  Pit toilets are available at Antietam Creek, Brunswick, and Monocacy Aqueduct.  Additional porta potties are located along the trail at hiker biker camps including Indian Flats.  There are no sink or shower facilities along the trail.  The national park service manages potable water pumps at each site; however, the pumps are typically turned off during winter months and were not available during our trip.  We confirmed water availability before our trip and brought an ample supply for all scouts and adults in attendance. 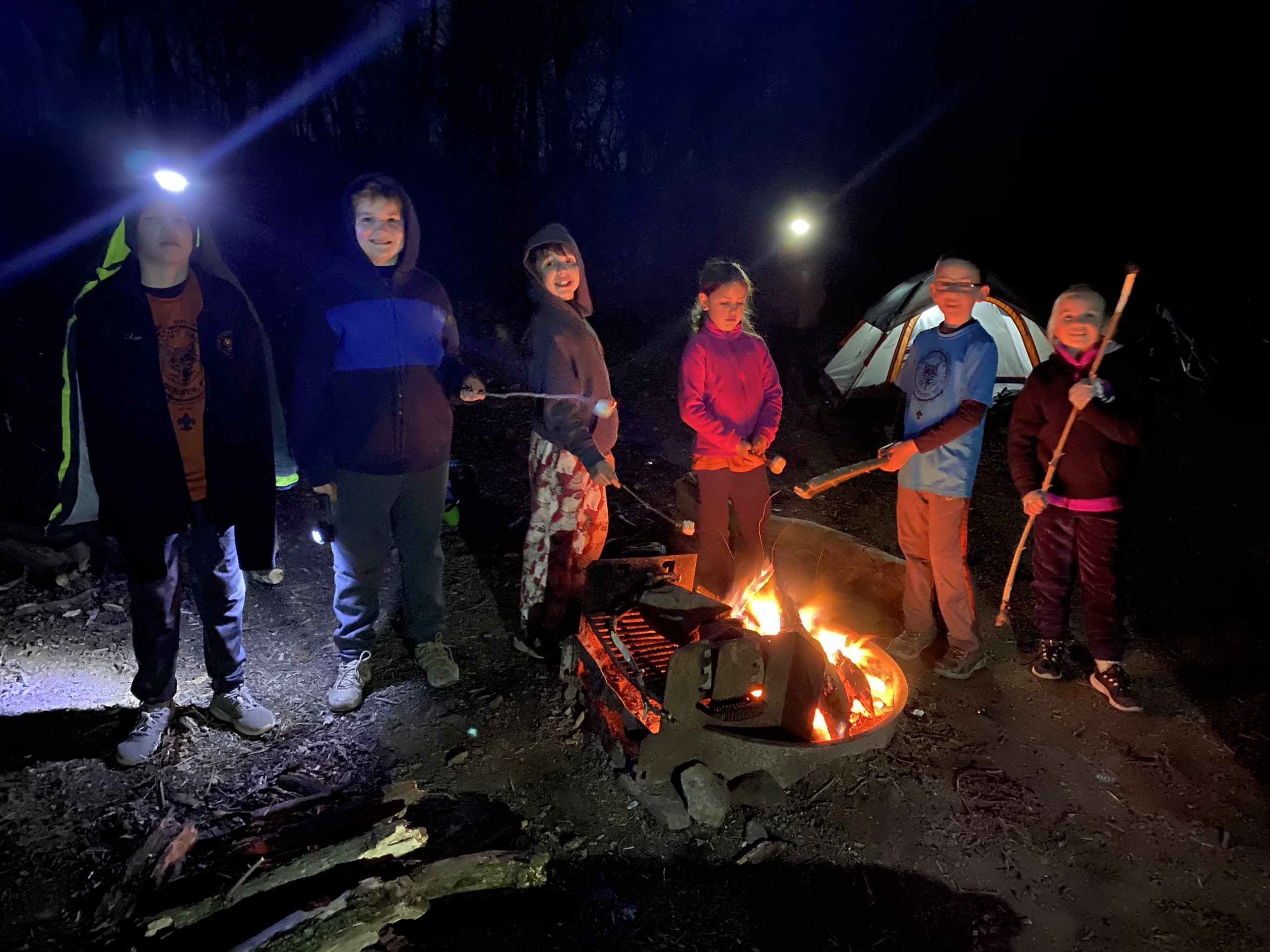 Supported Bikepacking: The main programming for this event was a 27 mile bike ride along the C&O canal with camping at both ends of the trip.  Since this trip was performed with Webelos and AOL scouts, it was designed to be a supported ride so scouts were not required to carry their gear on their bicycles.  We had a group of adult leaders that completed the ride with the scouts, another group of adult leaders that helped to shuttle vehicles and gear from the start point to the end point, and an additional safety driver that shadowed the rider group and was available to help in case of emergency or pick up struggling riders if required.

Intro to lightweight Cooking:  The secondary programming for this trip was to give scouts an opportunity to plan meals around a light weight minimalistic approach suitable for backpacking/bikepacking.  All of the meals prepared for the weekend consisted of non-perishable and easy to cook/rehydrate foods.  In the meetings leading up to the trip, scouts made their own reflectix cozy and practiced rehydating food using boiling water heated with small Jet-Boil style stoves.   This individual cooking method also allowed scouts more freedom to customize their personal meal for the weekend by selecting their choice of dehydrated food (spaghetti, ramen, rice, potatoes) and add-ins (canned meat, spices).

Historical Tour:  The third programming element for this trip was learning about the history of the canal while stopping to see the various locks, lock houses, aqueducts, and other canal structures along the way.  Several portions of the trail also offer beautiful views of the Potomac river.  The C&O canal museum and flooded canal structure near the Great Falls area makes for a great optional stop to round out the historical experience during this trip. 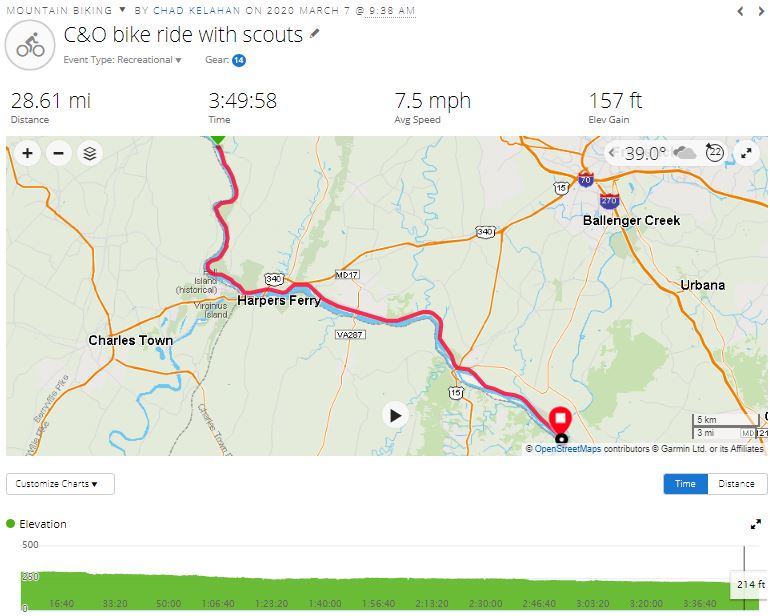 This bikepacking trip was for Webelos (4th and 5th graders) scouts and was intended to be a capstone event for the Arrow of Light scouts that were preparing to cross over to Scouts BSA (formerly Boy Scouts).  As such, I challenged the scouts to plan an event unlike any of the other camping trips we had done previously as a pack.  We had considered several options including doing a supported backpacking style trip, this bikepacking trip, or a Castaway themed primitive camping trip and the scouts voted for the cycling option.  Once the scouts selected their preferred trip, I developed the plan for our ride with a focus on selecting relatively accessible camping areas, having a challenging but achieve-able ride distance for the age group, and ensuring we had a good logistical plan to cover our one-way trip.

As mentioned above, I selected the Antietam Creek campground area as our origin because it is one of the few camps along the C&O that allows you to reserve a site in advance.  The reservation fee was a nominal $9.00 but provided us the security needed to arrive late on a Friday night and setup camp without having to worry about finding a free place to camp.  Additionally, we wanted a site that was accessible to vehicle access so we could unload our gear and setup camp easily on Friday night and then repack our gear into a vehicle on Saturday morning before starting our ride.  Antietam creek was a perfect basecamp to launch our trip.

The logistical plan was the backbone that allowed this trip to take place.  We don’t typically caravan in large groups when headed to Pack camping trips because it can lead to unsafe driving trying to keep all vehicles together, but for this trip we decided it would make it easier.  We met at our chartered organization and departed as a group.  Our first stop was the end point of our ride near Monocacy Aqueduct.  We left two vehicles at Monocacy and loaded everyone and their gear into the three additional vehicles to head to Antietam.  Our safety driver drove up separately on Saturday morning and met us at Antietam creek before we departed for our ride.  We also had two additional leaders drive up later on Saturday morning to begin shuttling our vehicles from Antietam to Brunswick.  We locked everyone’s car keys in a single vehicle which could be unlocked using a second set of keys by our shuttle team.  In the time it took the group to ride from Antietam to Brunswick, our shuttle team was able to move all three of our vehicles from Antietam to Brunswick.  After we ate lunch as a group at Brunswick, the shuttle team worked to move our vehicles from Brunswick to Monocacy so that our gear was ready for us to pickup by the time we completed our ride.

This trip was extremely successful and a lot of fun for the scouts and adults that participated, but there is definitely some room for improvement when we complete a similar event in the future.  The ~27 mile trip was pretty easy for a few of my scouts and was more of a challenge for others.  There were also two scouts who needed to be picked up by the safety driver at the half-way point and about three quarters of the way respectively.  If  we had performed some shorter day trips before this event I would have had a better understanding of all of my scouts’ ability level.  Speaking of which, when we started the day we tried to keep everyone spread out enough that we could ride safely but at the same time maintain no more than about a half mile distance between the front and back of the group.  As the day went on, it was a challenge to keep everyone together as a couple of the riders got tired and needed to go at a much slower pace than the majority of the group.  In hindsight, it probably would have been better to split the larger group into two patrols based on ability level and had the slower group start a bit earlier than the faster group so that the entire group could arrive at the lunch spot at the same time.  Additionally, our timing of the trip was not ideal because it was still late winter and we experienced freezing temperatures both nights.  Fortunately the daytime temperatures were in the 40s/50s so it made the ride bearable.  If it had been colder during the day I would have cancelled the trip.  An ideal time for this trip would be mid-spring or mid-fall when the weather is more moderate and the water pumps are fully operational.

I had a blast on this trip and loved how we were able to do a very different style of camping with the scouts before some of them crossed to Scouts BSA.